skip to main | skip to sidebar

Thanks to Dan Roberts for sending this to us. He sent it to us in May 2010 but the encounter is dated October 2009. Thanks again Dan

I was hunting for elk on Thursday morning, October 7, 2009 with a few friends. We were on the South slope of the Uintah mountains about 30 miles North of Duchesne. The ground was frozen and there wasn’t a cloud in the sky. This area is forested with pine trees interspersed with groves of aspen. Just before I was walking along the Dry Gulch Pole Road and had gotten about ½ mile down the road away from my hunting companions. It was a beautifully clear and cold morning.

I heard two sounds off to my left, perhaps 60 yards into the forest. The first sound was a “whack” followed immediately by a “thump.” In my mind I pictured an elk bumping it’s antlers on a tree as it slipped on a steep slope, stomping a foot as it stopped slipping. I quietly chambered a round into my hunting rifle and carefully stalked up the road while looking for the elk. There was a grove of young pine trees between me and the source of the sound that I could not see through, nor would I be able to go through without making a lot of noise. I retraced my steps back up the road until I could see beyond the young pines and then stalked my way to where the sounds must have come from but could not see anything.

I could hear a creature making noise on the other side of the young pines but by now was pretty sure that whatever the creature was it was not an elk. I took care of some morning business and then readied myself for more hunting. I have been fascinated with stories and legends of Sasquatch since I was a young man but have never had a reason to take them seriously. Wondering if the whack had been a tree knock I picked up a stick and whacked a tree. Right away I heard another whack a ways off in the trees. To say the least, I was astounded. In disbelief I whacked the tree again and heard another response, only this time it was closer! My astonishment was now accompanied by fear and excitement.

I exchanged a couple of more tree knocks with my unseen acquaintance until it was directly opposite me on the other side of the young grove of pine trees, about 60 feet from me. Too frightened to make any more knocks I tried to peer through the young pines. For a couple of minutes I stood there barely able to believe what was happening. I could hear something moving about but couldn’t see anything. I strained to catch a glimpse of hunter orange or any kind of movement, but saw nothing.

Eventually I stepped away from the young pine grove moving back to the road. As I moved the sounds moved to stay opposite of me across the grove of young pines. I continued walking down the road for a little while until it dawned on me that I was moving farther away from my friends. I turned back, marked the location on my GPS, and continued hiking back up the road.

Time and distance from the encounter started to rebuild my courage and I thought of things I should have done, like call out to see who might have been there. Perhaps 15 minutes had gone by and I was much closer to my friends. I thought of how curious these creatures can be and wondered if I had a new forest buddy that was following me. I picked up another stick and gave the nearest tree a whack. Again, right away I heard another knock off in the woods just out of sight! And again we exchanged knocks as the other creature approached to within 50 feet of me – on the opposite side of another dense growth of young pines. I knocked one more time and heard two responses, one close followed by another distant one that sounded like it was near the first encounter.

This time my friends started to talk to me by radio. I also called out to my new forest buddy, first calling each name of my friends and then asking loudly “Who’s there?” There was no audible response. I could hear whatever it was moving about slightly as I occasionally spoke to my friends by radio. Eventually I heard the faint sound of a truck making it’s way slowly up the rough road. As the truck got closer I stopped hearing movement.

That afternoon we hunted the same area a mile or so from my encounter. When we got back together and returned to camp one of my friends asked if any of us had been knocking sticks. He could hear a creature in the woods just out of sight and would occasionally hear a knock. He also said a squirrel was dropping pinecones every few feet along some fallen trees.


Dan R. sent this to us a few days later. thanks Dan.

I believe the coordinates are N 40-33.944 W 110-14.539. I went back with my son and dog a few days later and took pictures of the area. This last summer I took a cousin back who wanted to see the area. As we walked around I realized how much easier it is to see out of that grove of trees than to see into it. I'm sure whatever it was could see me in my blaze orange as plain as day. However I couldn't see anything. Then again after checking it out with my cousin I think it was a lot closer than I had originally thought

This series of photographs were taken September 16, 2007 in Northwest Pennsylvania by R. Jacobs who was scouting a hunting area with a Bushnell automatic trail camera. The first of the three photographs show two bear cubs, then 28 minutes later the camera caught two pictures of what’s being called an unclassified primate. The Pennsylvania Game Commission said that it was just a bear with severe mange. If you follow the link they will show a picture of a primate in a zoo and a skinny mangy bear in the same pose. To me it's pretty clear that the R. Jacobs photographs are not of a mangy bear but of a juvenile primate of some kind. 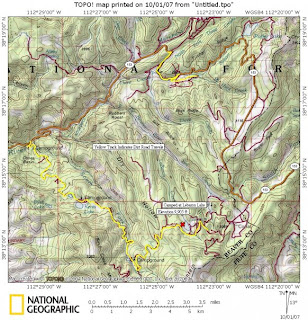 This is where we ended up going for our first bigfoot trip. we went to the exact spot of the sighting and spent the night. we hung a sound activated tape recorder from a tree. the only sounds we heard that night were a pack of coyotes howling and yelping at the moon. freaked me out because i didn't know what it was. luckily jesse knew what it was and stopped me running for hills in my long johns. all in all it was a good trip, bit cold, nothing bigfoot to report but a good trip. will maybe return to the area at somepoint. if i was bigfoot i'd probably live in the area. real nice place.
BFRO Report 15336: Daytime sighting at Labaron Lake, Fishlake National Forest.
this is the sighting that made us go look in this area.
LOCATION DETAILS: remote,wooded area lots of wildlife,nice pleasant summers.winter, cold as hell.streams,ponds,lakes a nice place. Theres a road east out of beaver u travel on for about 12 miles in the forest.then u take a dirt road about 18 miles to lebaron res.
Posted by N8 at 3:47 AM No comments:

This man Peterson from Arizona claims to have had an encounter with Bigfoot and claims to have shot Bigfoot. This video shows his interview and later shows petroglyphs dating from 100 – 1000 years ago showing giant man that roamed the area.